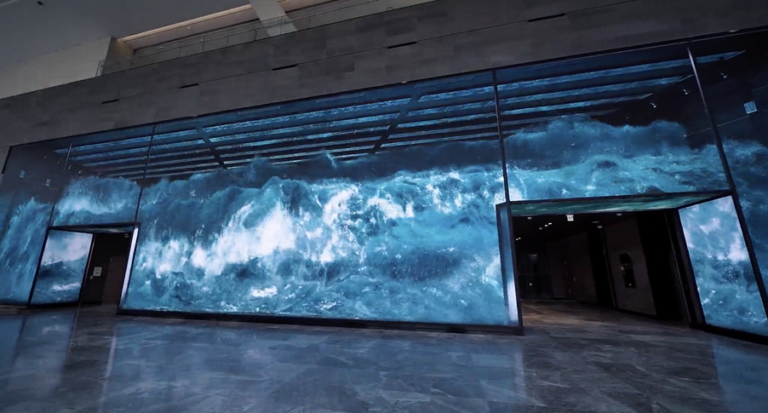 Set in Seoul’s Coex K-Pop Square in the upscale Gangnam district, the display is composed of mega-sized LED screens installed on the building’s facade, creating an electronic illusion that runs for 18 hours a day. The public art installation portrays colossal ocean waves crashing perpetually in a virtual aquarium overhead. D’strict created the lifelike wave effect through a series of anamorphic illusions on a massive outdoor projection, made up of various vantage points that create a sense of realistic depth — so realistic that when you walk past, you may even flinch at the sight of them. Measuring 80.8 metres in width and 20.1 metres in height, it’s touted as one of the world’s largest anamorphic illusions, The Korea Herald even reporting that the towering waves make up roughly four South Korean basketball courts in size.

D’strict is the digital mastermind behind the work, saying, “property owners with outdoor public media (DOOH) usually make money through advertising, but not always by showing advertising content. In many cases, various types of art content is used to create a good ambiance of the space where public media is installed. The WAVE content is the first IP content, and we will continue to expand our content to outdoor public media.” They specialize in designing, producing, and delivering awe-inspiring content that offers new visual space-based experiences to the world. The futuristic studio is known for having launched the world’s first 4D art digital theme park, Live Park, in 2012. Since then, they’ve secured project after project of avant-gardist proportions, including more virtual theme parks, a K-Pop hologram theatre and a plethora of UX installations such as this one at Renhe Shopping Mall.

Although the crashing waves set in the middle of downtown Seoul may seem like a novelty, they’re actually not the first of their kind – d’strict’s first crashing wave project can be found at Nexen UniverCity, where the UX installation appears on a virtual wall that enhances the location’s design and guest experience. D’strict’s latest billboard comes as a part of a larger project to develop K-Pop Square into a Korean version of Times Square, incorporating different forms of advertisement media, culture and arts all in one hub. The name Public Media Art #1_ WAVE seems to indicate that the installation is one of an upcoming series of similar works by the studio.

To see more of d’strict’s work, check out their Vimeo and Instagram pages.