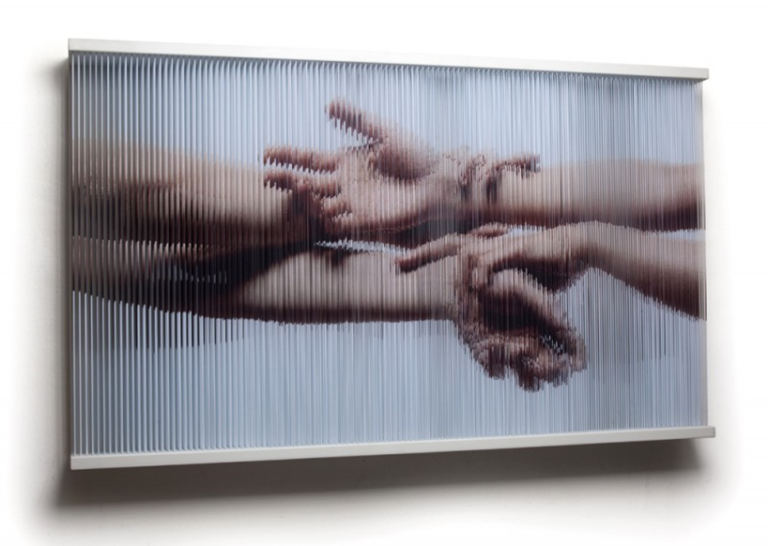 Recognized for his experiential body of work made using a wide range of technology and media, Seoul-based artist Hong Sungchul explores a new age of social interaction through his celebrated String Mirrorsinteractive series. Breaking the codes of traditional two-dimensional art, Sungchul’s optical illusion-inducing works were created using hundreds of printed elastic strings that, when combined, create three-dimensional images. The sculpture-cum-photographs depict ghostly, intricate and contrasted portraits of the human body that morph and move depending on the position from which one views it. String Mirrors employs techniques used in optical and kinetic art forms to engage interaction and warped perception from the audience, eventually leading them to create their own reality from their individual viewing experience. Never fully revealing itself, viewers are prompted to explore the work in different ways either by moving around it or by changing their field of vision to create their own full picture. Sungchul’s “use of numerous staggered elastic strings […] communicates his unique concept of visual consciousness. The broken images interlace and transform to reveal a final image, incomplete until the dynamic interaction of the viewer.” In inviting the audience to view it from different perspectives, the 3D image forces them to leave behind their normal visual perception.

The recurring use of hands in String Mirrors reflects the artist’s belief that hands serve as a window to the soul, or “mirrors”, of our deepest self. One work, Strings hands 008, depicts a pair of hands clutching a string of tangled beads. Another work, Strings hands (Third Edition)depicts two pairs of hands reaching for each other. The artist’s use of images inducing feelings of tension and frustration reflect man’s fight against isolation and loss of belonging brought on by today’s segmented digital age.

Intricate and delicate yet contrasted and stark, from afar the hundreds of strings create the illusion of a three-dimensional body, lifelike in appearance. Upon closer look, the body loses its form, dissipating into separate individual strings. Providing depth just as they provide shallowness, the strings’ meaning changes depending upon the way the viewer approaches them — a compelling commentary on the modern human condition. View the full String Mirrors series here.